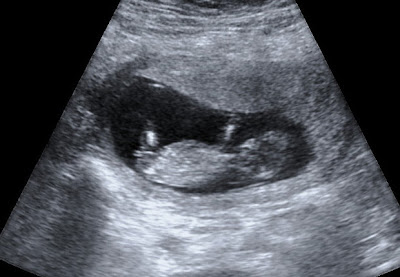 Your mother, it should be said, was remarkably composed during this procedure, the first chance we had to get a good look at you.
We'd both been a little apprehensive about this ultrasound, me because your impending arrival still seems a little... esoteric.
Your brother, it shall be noted, looked at you for a total of about 20 seconds before asking if he could have his Nintendo back, so I guess your appeal to him will be greater once you finally arrive in the flesh.
For my money, though, that first glimpse of you, was just magic. You seemed to have some sixth sense of being watched, because as soon as the camera found you, you wriggled over like you were snuggling further into your blankets. This should stand you in good stead amongst members of this family, all of whom have a deep seated affection for our beds.
Speaking of beds, we got some fairly astonishing news not so long ago - you will have a cousin arriving only a week after you - (I've already suggested to your Unky Dave that we ask for a discount at the hospital) - so we have a slight pressure on the accumulated baby ephemera which has, through Abraham, then Samuel and now Thomas, been floating through the family.
With this total failure of scheduling, our careful passing of stuff from one house to the next will have to come to a halt. This in mind, I secured a cot from Freecycle the other day, so at the very least you will have somewhere to sleep when we get you home. I don't know that you'll have anything else, but we'll sort that out soon enough.
We still don't know if you're a boy or a girl, personally I'm convinced you're a boy, which is good because we'll now have an entire forward line for Carlton in about 2025.
What I do know, and what will never change, is that from that first glance at you, from the first time you wriggled, my heart broke all over again, and;
I love you.
Posted by billyjoe noodle-bob at Friday, August 20, 2010 5 comments:

I was reading a book last night. The title's not important; one of the things you'll find out about me is that my side of the bed is generally about 3 books deep with disposable airport fiction. The book, though, was talking about the way that differences between things are sometimes more important than the things themselves.
It said things like "the difference between one and two is one, but it's more than that", which, I'm sure you'll agree, doesn't make any damn kind of sense at all. It went on, though, to talk about how the difference between one and two is the difference between one and "many". Then it started to make sense. That having one of something is pretty easy, you don't have to divide your attention, you don't have to mediate arguments about whose cup is the blue cup, or whose goldfish had died*.
*(when I was a very young man, your uncle Dave and I each had goldfish. They looked identical. Whenever one died, it was my goldfish that had died, according to your uncle Dave. This scarred me for life)
So now we're gearing up for an occasion in which there will be "many". Certainly, not "many" as in the many that your grandparents had to deal with (at various times up to four children in one place), which entail a whole gamut of logistical requirements, but two is going to be a very interesting time.
Now I'm off, to see if I can fit a baby seat into the back of the Subaru.
Love you.
Posted by billyjoe noodle-bob at Wednesday, July 07, 2010 1 comment:

There was always a burning question in the back of my mind, starting this. What I would say about it, when the time came, when the question got asked, if we had more than one.
If I'd be in a position of having to defend the conversation.
Now that the original pumpkin is five, and seems to have assumed the moniker of "monkey" more than any other, then perhaps I can make a determination. An executive decision, then, that this can be a story for two people, about two people.
That when I call you, pumpkin, "pumpkin", that I'm talking to you, nestled tight inside my beloved, and that it's got nothing whatsoever to do with the other pumpkin, who used to be pumpkin but isn't anymore because he's monkey. Look, I know, this is getting confusing, and you're only a tiny batch of cells right now, but perhaps, as with your brother, if I explain it in terms of Batman, you'll understand. It's like Batman Beyond, you know, where Bruce Wayne realises that he's too old to be Batman anymore and hangs up his batsuit and then...
Ok maybe I'm overthinking this.
All I'm saying is, pumpkin (2) (the pumpkening), is that it's a delight to be told of your existence, and that I'm terribly excited that you're coming, and that I can't wait to meet you. That you're going to be loved and cherished and welcomed and snuggled and raspberried. That you're going to have an older brother called Bram, and a cousin called Sam (and another who's about to arrive, I'll let you know as soon as I know). That I'm already 100% certain what your name is, although I'm pretty sure I'll have to fight tooth and nail for it. That you have, waiting (although they don't know it yet) a huge gaggle of aunts, grandmothers, uncles, grandfathers, great versions thereof, step, half, once removed etc etc etc (you get the picture).
Love you,
Dad.
Posted by billyjoe noodle-bob at Tuesday, June 15, 2010 2 comments:

This is a Flickr badge showing public photos from billyjoebob. Make your own badge here.